August 25, 2022
Have a Cigar!               Here is more about early cigar makers. We know that in 1901 Sleepy Eye had at least four men practicing this craft. We have the names of C. A. Lemke, J.B. Hacker, Otto Nothardt and Albert   Wandersee. Lemke lived on the north side of Main in the block across from the old L.P. Jensen residence, and that house was between the corner) later site of a creamery) and the Dyckman Library.             Hecker had been employed by Lemke and in 1901 he opened his own shop. Nothardt apparently was on the North side of Main near the Radl (later Martinka) corner. At least, his saloon was in that block. There is reason to believe that Hecker later went to New Ulm. No information has turned up so far about Wandersee, who was perhaps a relative of later Wandersees living in Sleepy E ye. In 1902 William Davison was a cigar maker, and in 1905 Albert Kap
Post a Comment
Read more 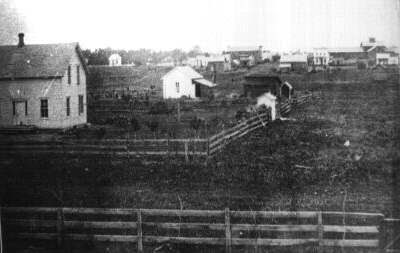 Loreno After the Dakota Conflict of 1862, settlers in the area were so infuriated with the Indians that they decided they didn't want a town to be named after one. On January 6th, 1880 -an election finally changed the town's name to Loreno.  The town of Sleepy Eye had to go to the Legislature to make this change.... However, it didn't last long, though, and it was changed back to Sleepy Eye Lake, which was the original name on May 2nd, 1881. This year our town is celebrating its 150th Year Anniversary... We are known as the City of Sleepy Eye.
Post a Comment
Read more
May 12, 2022

The Sleepy Eye Historical Society Depot Museum Is Now Open For The 2022 Season! Our Hours Are Wednesday  - Saturday 10 Am till 4 PM
Post a Comment
Read more
March 17, 2022

Thank you for your continued support and patience during this unprecedented time. We're excited to welcome you back to our historical site and museum!   Keeping us all safe   Our priority is to maintain a safe environment for visitors, staff, and volunteers. Please read for details about health and safety precautions: Face masks are encouraged but not required for all visitors regardless of vaccination status. MNHS sites reserve the right to request masking in areas where social distancing is unavailable, in confined spaces, or in areas with limited air circulation. We are conducting enhanced cleaning of high-touch surfaces and providing hand-sanitizing stations for visitors. Social distancing is encouraged. If you are feeling sick, have flu-like symptoms, or have been in contact with someone who has recently had COVID-19, please visit us another time.
Post a Comment
Read more
December 01, 2021 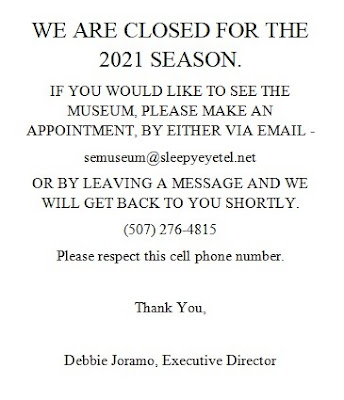 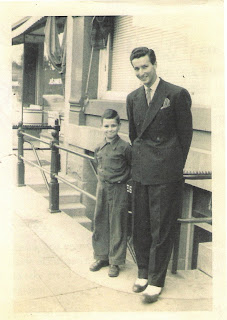 Charles Glotzbach Declared Dead by Navy Department George I. Glotzbach & Charles Glotzbach Charles George Glotzbach was born on May 15, 1920 at Sleepy Eye, Minn., to George J. Glotzbach, Jr. and Anne Hillesheim Glotzbach.   He was baptized May 20, 1920 by Rev. James Klien at St. Mary's Catholic Church. Sponsors were Dolores and Edwin Laue. He was confirmed at St. Anne's in Santa Ana, California, on May 27th, 1934 by the Most reverend John J. Cantwell. In Ja n uary, Donald 1928 and he moved to Santa Ana, Calif. with his mother and brothers Donald and John.   He attended several grade schools,   and on Sept. 1, 1934 entered St. Anthony's Seminary & College at Santa Barbra, Calif. He completed four years of study and graduated on June 4, 1938. After several years at Santa Ana College and the University of Notre Dame at South Bend, Indiana, he was employed   by Southern California Edison Company until joining the United States Naval Reserve.   He was appointed ensig
1 comment
Read more

The Birth of a Town of Sleepy Eye 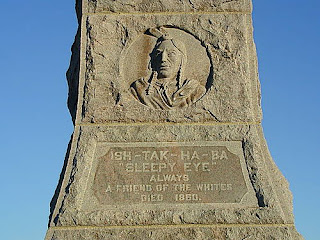 The Birth of a Town of Sleepy Eye How Do You Do'   Where Is My Home? Sleepy Eye, Minnesota. You say I'm kidding you, there is no town by that name.   Well, believe it or not, that's the eyebrow raising reception a Sleepy Eye Resident gets when traveling. I never get tired of hearing of the beauty of the Sleepy Eye Area.   As you come over the small hill east of town, you see nestled in the woods a beautiful lake, with two smaller takes on each side of them as far as the eye could see, the waving grass of the prairie broken only by small clumps of poplar trees. In and around this area lived the Prairie Sioux or Dakota Indians. The Prairie Sioux were composed of small tribes roaming the Dakotas and Southern Minnesota.   The tribe that we are interested in lived along the Minnesota Rive and was under the leadership of a chief called "Isk-Tak-Ha-Ba, meaning "Eyelid Drooping". Here is an interesting Face to me. "Ish-Tak-Ha-Ba was born to a non chief
Post a Comment
Read more
More posts 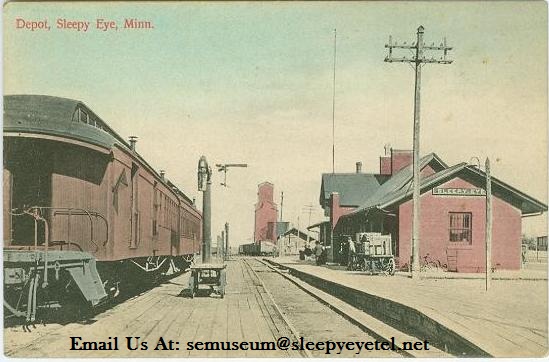